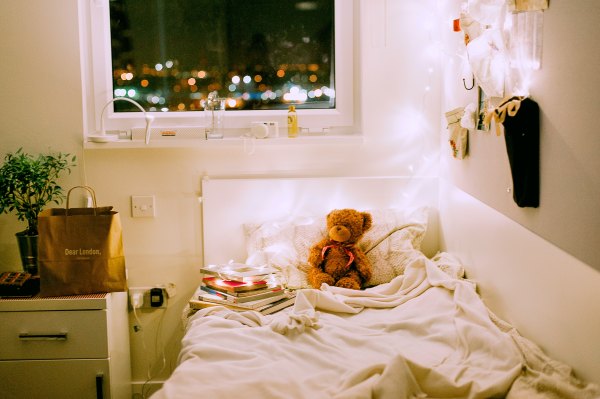 I had way too many bad roommates in college. By sophomore year I thought that I deserved to finally have a good roommate. But fate played a cruel trick on me and made sophomore year ten times worse than freshman.

My freshman year ended with me choosing to live in the same dorm for the next year. I picked a room right down the hall from where I lived and threw myself into the roommate pool. My university had us take surveys to match us with a roommate and I answered very honestly.

I found out my match about a month before move in. I e-mailed her right away to introduce myself but never heard back. I couldn’t find anything out about her on social media but I am a pro internet searcher so right before we moved in I was able to find her. Turns out, she didn’t go by her actual name and instead went by a “stage name”.

Let’s call roommate “P” for the sake of the story. P had already moved into our room when I got there. Our dorm was pretty cool because we had two rooms. The first room had to be walked through to get to the second. P picked the room in the back.

I have no idea how long she had lived there when I moved in but the room was disgusting by the time I moved in. There was trash everywhere and it smelled horrible! My mom and I tried to introduce ourselves but she didn’t move from her bed or acknowledge us. I thought it would get better.

I moved all of my stuff in and got settled. P slept during the day and hardly left the room. I wondered if she went to any classes. I swear she slept with her eyes open too. There was a door separating our rooms but she refused to shut it even when I wanted to change or sleep. At night she’d blare her TV which was against the same wall as my bed. I tried to ask her to turn it down or shut the door but she was super rude about it and I hate confrontation.

My mom works at my university but I hated using her for anything. I didn’t want any special treatment. I went straight to the hall director and he explained to me that I had to stay in that room for two full weeks before I could petition to move rooms. I was devastated.

The more I stayed in the room the more I felt unsafe. I couldn’t sleep, study, or relax in that room. I tried to talk to my RA who came to our room to mediate but it was a joke. My RA actually seemed scared of P and the mediation only made things worse for me.

The hall director gave me two options after my two weeks were up. 1. Move to a single room and pay an extra $2,500 per semester or 2. Choose the only remaining room needing a roommate. I chose the roommate.

This post is already super long so please let me know if you want to hear about Roommate #2. Let’s just say that she was the exact opposite of me in every single way.

I don’t want this post to be negative or to scare you away from having a roommate. I know a ton of people who met their best friends in college and I wish that was true for me. Take the chance on a roommate! Even if it turns out bad then at least you tried and had the experience of living with a roommate

If you are about to start your freshman year I really urge you to take a chance and say yes to new opportunities. You honestly never know when something great will happen and it’s better to put yourself out there then regret not doing anything.

If you are in a bad situation make sure you ask for help. I wish P and I could have resolved our issues but she really didn’t want anything to do with me and that’s okay. You won’t be everyone’s cup of tea and that’s a life lesson that I needed to learn. It’s not okay to treat someone the way she treated me and I’m usually not a quitter. But in this case, I needed to remove myself from the situation in order to feel safe.

Just remember that you never know what someone else is going through. I try not to think too negatively about P because I have no idea what was going on in her life at the time. It was still no excuse to treat me the way that she did but I still wish her the best.

Let me know what your roommate experiences were like!

9 thoughts on “Dealing With Bad Roommates in College”